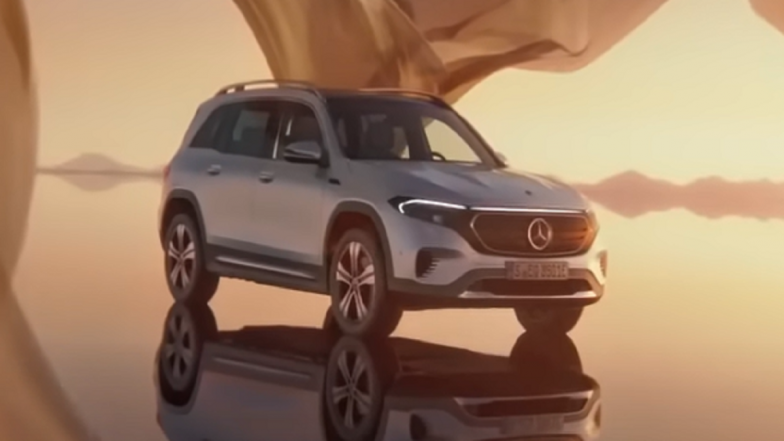 New Delhi, December 2 : India’s top luxury brand Mercedes-Benz has launched its EQB all-electric SUV in India priced at Rs 74.50 lakh (ex-showroom, across India). The Mercedes-Benz EQB luxury electric SUV has been already available for bookings alongside the GLB, from early November for an advance token amount of Rs 1.5 lakh.

The Mercedes EQB is positioned below the EQC SUV and is the third EV model in the brand’s line-up in India. The EQB and the Mercedes-Benz GLB, which launched alongside, have both arrived in India as fully built imported models. Mercedes-Benz GLB SUV Launched in India; Find Specs, Features, Prices and All Important Details Here.

The Mercedes-Benz EQB E-SUV flaunts patent EQ styling with stylized LED headlights connected by a horizontal LED bar and split style LED taillights. The SUV gets a set boldly styled of 18-inch alloy wheels. EQB is built on the same architecture as the GLB and hence, shares the same silhouette. However, the EQB gets its distinctive visual appeal with its blanked-off front grille, lighting design tweaks, redesigned front and rear bumpers and a full-width LED light strip at both ends. The EQB comes in 5 shades of Cosmos Black, Digital White, Iridium Silver, Mountain Grey and Rose Gold.

On the inside, EQB overall interior design and layout are similar to its fossil fuel sipping siblings – GLB and GLA, excepting the flashy gold trims on its unique air vents. It also offers a 7-seat layout like the GLB that offers better seating functionality. The EQB’s features include the large 10.25-inch digital instrument cluster and touchscreen infotainment system, 64-colour ambient lighting, powered front seats, a powered tailgate and a large panoramic sunroof to name a few. Maruti Grand Vitara CNG to Toyota Hyryder CNG, Here’s Top 6 SUVs to be Lunched in India in December 2022.

Unlike the international markets, the Mercedes-Benz EQB is available in India in a single variant – EQB 300 that offers 228hp and 390Nm along with an all-wheel drive system. It comes powered by dual electric motors that enables the EQB to sprint from 0-100kph in a claimed 8 seconds and a claimed top speed of 160kph.

The electric motors draw their juice from a 66.5kWh battery pack, which offers a range of up to 423km. The fast-charging support using a 100kW DC fast charger is claimed to offer 10-80 per cent charge in just 32 minutes, while fully charging the EV via an 11kW charger will take 6 hours and 25 minutes.

The Mercedes-Benz EQB has no direct rivals in India yet, and is a more affordable luxury electric SUV, as despite being a CBU model, the EQB is Rs 25 lakh cheaper than the EQC.

(The above story first appeared on Morning Tidings on Dec 02, 2022 02:33 PM IST. For more news and updates on politics, world, sports, entertainment and lifestyle, log on to our website morningtidings.com).