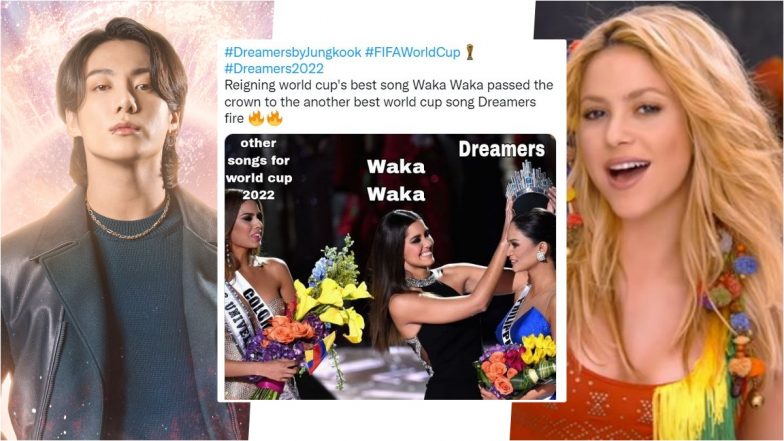 BTS’ Jungkook released his first official FIFA World Cup soundtrack, “Dreamers” on November 20, 2022. And the peppy and inspirational track for FIFA World Cup Qatar 2022 seems to have become everyone’s favourite, so much so that fans are calling it better than Shakira’s “Waka Waka” song that was the official song of the FIFA World Cup 2010. Yes, believe it or not, netizens are almost convinced that “Dreamers” is a rightful heir to displace “Waka Waka” as the best football world cup song ever! They are sharing funny memes and tweets to share their opinion. South Korean artist and K-pop idol Jungkook will be performing the “Dreamers” song at the 2022 FIFA World Cup opening ceremony on Sunday. The Colombian singer had performed “Waka Waka” at both the opening and closing ceremonies of the 2010 edition. FIFA World Cup 2022: From ‘Hayya Hayya’ to ‘Waka Waka,’ List of Official Songs and Anthems for Football Tournament in 5 Editions (Watch Videos).

What Do You Guys Think?!

WAKA WAKA I LOVE YOU BUT 🤩🤩🤩🤩🤩🤩🤩 pic.twitter.com/xJPkFhBnBX

That Would Be Me

me listening to dreamers and waka waka on loop pic.twitter.com/MPLjy49Lze