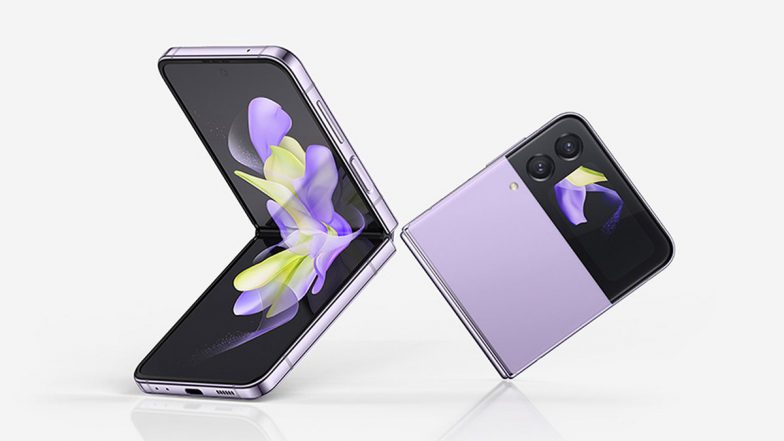 New Delhi, December 2 : The recently released Samsung Galaxy Z Flip has drawn the attention of the new-age smartphone buyers. As per reports, the South Korean tech major has already put the next-gen Galaxy Z Flip 5 on the anvil, and this time the foldable phone is said to be coming with a larger display.

A larger cover display will allow the users to easily operate on the cover screen, which will make it more functional. As Samsung’s market competitors are also working on a larger cover screen, Samsung is right to be planning ahead for the next iteration of the Galaxy Flip.

The Samsung Galaxy Z Flip 5 is also speculated to come braced with a new hinge design, which is supposed to reduce the seam visibility on the next-gen device. The next-gen phone is also expected to be lighter than its predecessor. Samsung To Bring Light Performance Mode to Galaxy S23 Phones To Save Battery Life.

Apart from major design upgrades, the next-gen Samsung Galaxy Z Flip 5 is also supposed to come with improved camera and other enhanced features. The next-gen foldable phone is expected to launch in the second half of next year (2023). However, Samsung is yet to confirm the new-gen model of both the Galaxy Z Fold and Galaxy Z Flip.

Samsung has also started offering the new Android 13 based One UI 5.0 update with many new features to its current foldable device offerings in the market. Hence, both the current Galaxy Z Fold 4 and Galaxy Z Flip 4 are going to receive this software upgrade.

(The above story first appeared on Morning Tidings on Dec 02, 2022 12:39 PM IST. For more news and updates on politics, world, sports, entertainment and lifestyle, log on to our website morningtidings.com).