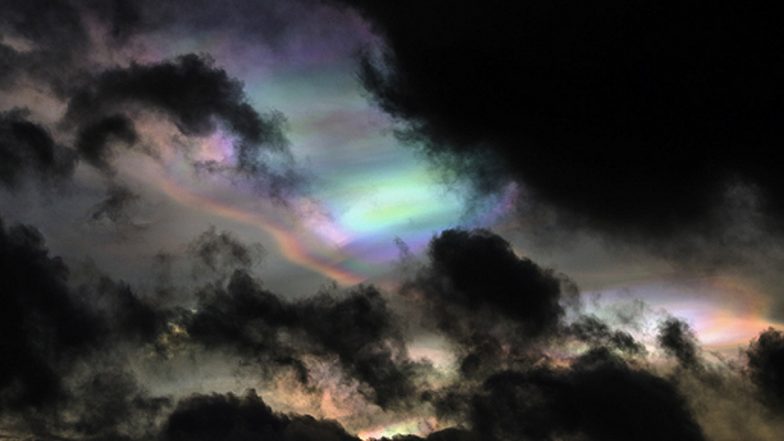 A Norwegian photographer shared a mesmerising picture of weirdly beautiful clouds that appeared over Norway. The viral clicks show the “Mother of Pear Clouds, ” caused by ice crystals far up in the freezing stratosphere. The extremely rare weather phenomenon is formed at intensely cold temperatures and can be witnessed two or three times at the most annually. As per some sources, the breathtaking view shows the degraded ozone layer. Extremely Rare Rainbow Scarf Cloud Appears in China; Viral Video of Awe-Inspiring Weather Phenomenon Stuns Internet!

The most beautiful clouds on Earth just made an appearance over Norway.

Polar stratospheric clouds are very rare. Normally the stratosphere has no clouds at all. PSCs form when the temperature in the Arctic stratosphere drops to a staggeringly-low -85 C. 1/

Vibranium Found For Real? Video Showing ‘Electrically Charged Rocks’ Sparkling When Rubbed Against Each Other Goes Viral, Looks Unreal!
Wait, What? Identical Twins Hope To Get Pregnant With Shared Fiance At The Same Time, Want To Raise Family in Sync; See Pics
Comment