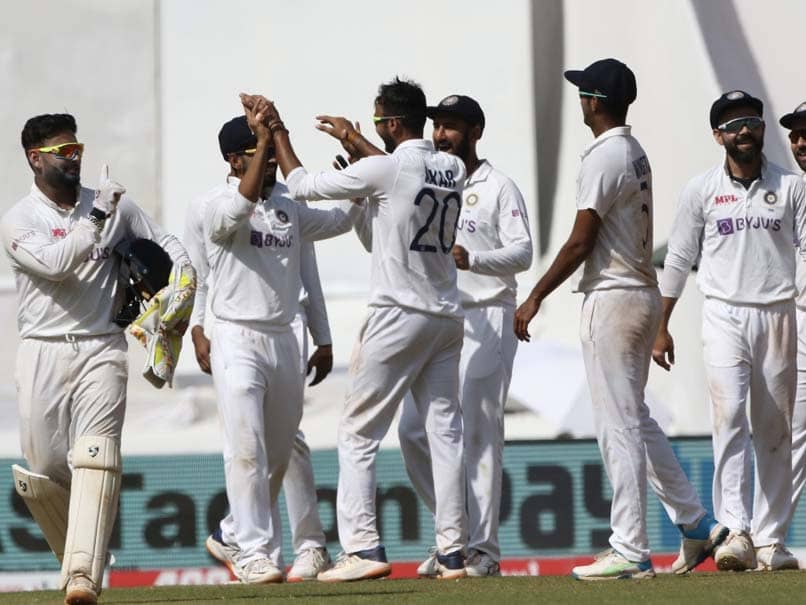 India defeated England by an innings and 25 runs to seal the series 3–1 and qualify for the WTC Finals.© BCCI


India beat England by an innings and 25 runs in the fourth and final Test to win the four-match series 3–1 and advance to the final of the inaugural edition of the World Test Championship on Saturday. Rishabh Pant (101) and Washington Sundar (96 not out) piled on the hosts for 205 runs in the first innings. Ravichandran Ashwin and Axar Patel bowled India for 135 runs, taking five wickets in the second innings.

India started the day at 294 on the seventh day and Axar Patel along with Sundar Patel continued to score in the first hour on Saturday.

Both added 106 for the eighth wicket before the mix-up ended in the middle. He was run out on 43.

Ben Stokes then bowled Ishant Sharma and Mohammad Siraj for 96 off four balls and Sundar dismissed England for 46 runs.

Stokes was the bowlers’ choice for England as he returned with figures of four for 89.

He was backed by James Anderson, who took three wickets for 44 runs, but his spinners disappointed on a surface that offered some turn and bounce.

In the second essay, the host team came out bowling with a healthy lead of 160.

Before lunch England negotiated in the last minute without losing any wickets but Ravichandran Ashwin took two wickets in two balls to shake the audience in the post-lunch session.

Joe Root looked good during his short stay in between, but misjudged a long ball from Ashwin and got stuck in front of the stumps.

Both teams will now focus their attention in the shortest format of the game as they will play five Twenty20 Internationals at the same venue from 12 March.