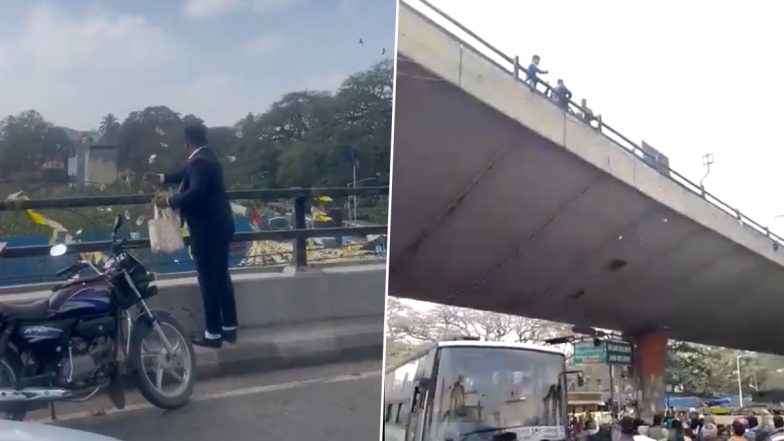 In a bizarre incident that took place in Karnataka, a man was seen throwing currency notes in Bengaluru. A video of the incident has gone viral on social media. Multiple videos show a well dressed man throwing currency notes from a flyover in Bengaluru’s KR market. According to reports, the man threw the currency notes below KR market flyover, which led to a frenzy among the public who rushed to gather the notes. Reportedly, the incident led to traffic snarl at K R market signal. By the time cops reached the flyover, the man managed to flee. Soon after the incident came to light, netizens took to social media to share pictures and videos as #KRMarket and #Bengaluru started to trend on Twitter. Bengaluru Shocker: Woman Jumps to Death After Husband Sends Divorce Notice, Alleges Mental Abuse and Torture in ‘Suicide Note’.

#Bizarre in #Bengaluru#Traffic came to halt on #Sirsi Circle #flyover and the road below it (#KRMarket) after a well-dressed youth went about throwing currency notes. Who was he and why did he do it is not known. @NammaBengaluroo @WFRising @TOIBengaluru @peakbengaluru pic.twitter.com/zXB6mndKm6